Our web of life is infinitely complex. Sophisticated transportation and financial systems, mass media and innovative technologies are but some of its subsystems which are fuelled and arrogated by globalisation. Accompanied by both value and vice, these advancements also interpenetrate with structural disparities such as poverty, unemployment, moral decay and a lack of education and leadership. When throwing into the mix elements of greed, unbridled power and a lack of collective compassion among its humans, you are bound to get a potentially toxic concoction from which an ill like modern day slavery has proven to emerge.

Over the past 15 years I have come to learn that modern day slavery, also referred to as human trafficking, seamlessly embeds itself in the hustle and bustle of everyday life. Enabled by our oversaturated minds, envious eyes and ambition-driven social insentience, it continues to exist with diminutive resistance. I once was complicit in this wicked cycle that oxygenates modern day slavery. I’ll try to explain…

My journey of discovery started out in June 2002 as a fresh faced policeman in the South African Police Services. Just finished with my basic training, I was determined to make my city safer. “To serve and protect”, after all, was the credo spoken by my uniformed dad in response to a 4 year old Marcel who asked him why he needs to go back to work – again! It was now my turn to take up the baton. Starting my career at a rapid response unit, high octane car chases, occasional shooting incidents and arresting notorious criminals were part and parcel of policing in a crime ridden South Africa. Arresting ‘prostitutes’, however, was an easy way to secure the numbers on our arrest scoreboard, especially when the more treasured violent criminals eluded capture. I vividly recall countless pleas for “mercy” and “help” by drug induced and often physically scarred women who claimed that they were “forced” or brought to the city against their will. I occasionally felt sorry for them. “Sometimes their tears seem real”, I recall telling a colleague at the time who quickly reminded me that we had a job to do.

The scales fell from my eyes after reading an International Organisation for Migration (IOM) [Issue 3/2004 https://southafrica.iom.int/publications/counter-trafficking] newsletter in 2005 which explained the elements and crime of human trafficking. It was something largely unheard of in South Africa and no laws dedicated to address it existed at the time. It was a paradigm shifting and convoluted light bulb moment for me. One filled with guilt and regret over missed opportunities. Sobered by my own ignorance, I was now ready to do things differently.

It was during my ensuing role as investigator when I volunteered to take over an investigation into a missing 15 year old teenager when the entire penny dropped. The investigation exposed syndicated activities on a national level and led me to a number of South African cities where I came to realise the calculated sophistication by which one human being can enslave another in the sex trade.

Modern day slavery occurs throughout the world with victims ending up in the hands of traffickers, who exploit them. These victims can be found in the world’s restaurants, fisheries, brothels, farms and homes, among many other forms of exploitative activities.

To this day I have the privilege to be involved in local and global projects, research and investigations into human trafficking. As a firm believer that human trafficking cannot be studied from an air-conditioned office, I enjoy spending time in the field engaging with any source of information that can shed light on criminal operations that intersect with human trafficking. Sharing such grassroots intelligence with relevant law enforcement agencies has proven to be an important contribution to broader human trafficking combating efforts.

Hidden, yet in plain sight, the cruelty, complexity and paradoxes associated with modern day slavery in the 21st century is everyone’s business. It takes a village to protect a village. Combating the problem also boils down to a battle of wits where we should consciously embrace creative and holistic approaches at the cost of fixes that tend to fail. As expressed by a shelter manager in my on-going research:

“…we’re dealing with very clever, well-organised syndicates and I don’t think we’ll ever be able to beat them until we work in a very trusting, efficient network ourselves. We can’t individually fight them and so we have to become a syndicate, we need to be working together, but it means a lot of trust between each other and keeping each other…accountable, in the loop, informed.”

Whether your village is New York City or Hlankomo in rural Eastern Cape, South Africa, you have a role to play. Consider and commit to some of the following:

About the author: Marcel van der Watt is a lecturer at the department of 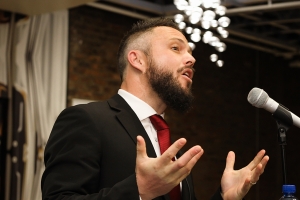 Police Practice at the University of South Africa (UNISA), and research coordinator at the Global Resources Epicenter Against Human Trafficking (GREAT). He was a member of the South African
Police Service for 10 years, where he gained international recognition for his work in counter-trafficking. Connect with Marcel on LinkedIn or ResearchGate.

*If you are based in another country and have nationally relevant details for tackling modern day slavery and human trafficking please share them with others in the comments section below.